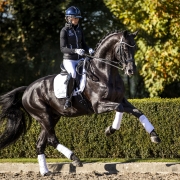 After Glamourdale (Lord Leatherdale x Negro) and Charlotte Fry won gold last year at the World Championships for Young Dressage Horses in Ermelo, the KWPN stallion no longer appeared in the ring. Last winter there were several stallion shows on his agenda, but at the Subtop competition today in Delft the champion duo made a fantastic return in the ring and at the same time the debut in the Intermédiaire I. That ended with the top score of 76.25% and a big score victory in the combined classification Small Tour.

“It was a long time ago for Glamourdale, but he was really good today. Really amazing! ”, says Charlotte Fry, the British stable rider of Gertjan and Anne van Olst. The duo showed a clear test but the stallion was occasionally just not completely alert to his rider. “Ponies were walking in the meadow next to the ring, which is a bit difficult for a stallion. As a result, he lost his concentration a number of times, but I can’t blame him, “Fry explains. “If there are no ponies next time, it will probably be better.” Four nines appeared on the protocol: for the trotting unit, the extended canter, the halt-salute and the series every three. “We also had many eights and a positive jury comment. I am very happy to be back in the ring with Glamourdale and he really enjoys it too. ”

The Van Olst Riders also won prizes in the rest of the top three. Van Olst rider Franka Loos achieved two scores above 70 percent: with the nine-year-old stallion Furst Romantico (Furst Romancier x Sir Donnerhall), who came in Czech hands at the last edition of the Van Olst Sales, she scored 71.25% de Intermédiaire I. In the Prix St. Georges, Loos sent the KWPN stallion George Clooney (De Niro x Wolkentanz), who was bred in Hanover, to 71.03% and thus the third place in this combined classification. with the KWPN stallion Diego (Negro x Don Gregory) 70.29% in their Intermédiaire II debut. The Grand Prix of Charlotte Fry and Dark Legend (Zucchero x Tango) was good for the third score of 69.78% . 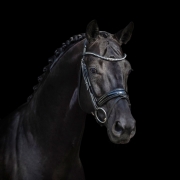 Last summer, Koco Linda already took a beautiful 4th place during the KWPN Championships in Ermelo. This wild daughter of World Champion Glamourdale (Lord Leatherdale x Negro) ran to the highest score during the IBOP test in Turnhout on Saturday 6 April. Franka Loos sent the extra moving mare to 83.5 points. Walk and canter were assessed with an 8.5 and for the canter she even received a 9.0. No lower than an 8.0 was scored on all other components. A beautiful end result for this young mare.