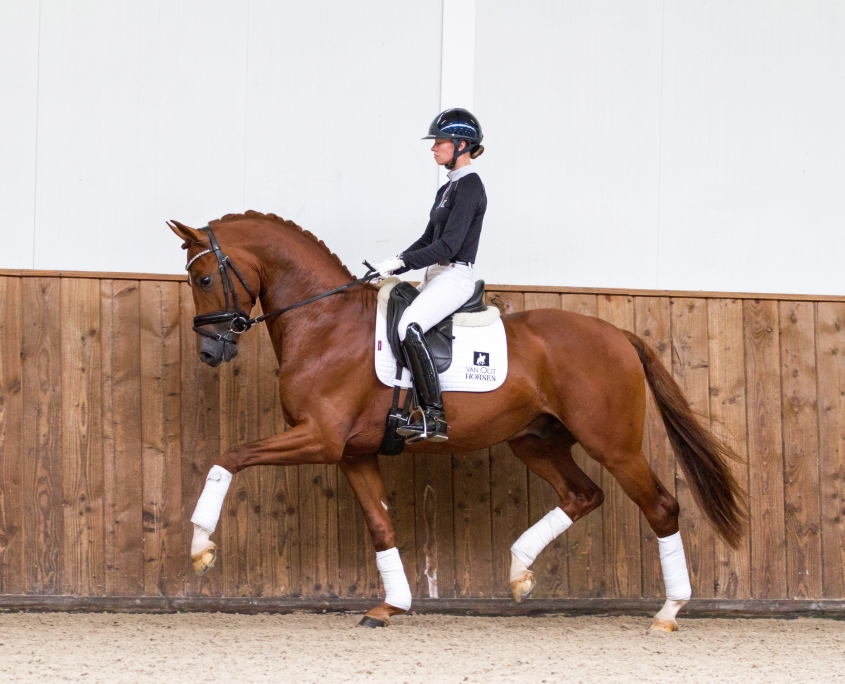 Van Olst Horses can look back on two very busy, but also two very nice days during the KWPN Stallionshow.

The first day started with the second viewing of Glamourdale son Mats van de Diekboer (mv. Johnson). He went through the arena with a great canter, the trot characterized by a lot of imprint and self carriage. Unfortunately, due to slight tension, he did not show the walk he can  completely as we are used of him and therefore he was not invited for the presentation. Perhaps we will introduce him again under saddle …

In the evening it was the turn of the stallions that were approved in 2019. Lantanas v. Sir Donnerhall x Hemmingway) proved once again to have a great movement potential. This genetically very interesting and impressive stallion was praised for his beautiful appearance and flexibility.

Then it was Lotties turn to enter the arena  with Chippendale son Giovanni (mv. Scandic) in the show block “The Road to Grand Prix”. The stallion is successfully competed on Small Tour level and showed his ease in the collected exercises.

In part two of this show block it was Glamourdales turn to show his skills . Under Lottie, he again demonstrated why he became World Champion in 2018. His canter is and will continue to be enormously uphill, he makes pirouettes on a dime and shows half passes of extraordinary quality. The fact that Glamourdale is close to be Grand Prix ready is also apparent from his talent for piaffe and passage. Strongly bowed in the hindleg, with a lot of selfcariage and with a rich front like a real king. A special conclusion for us for this evening.

On Saturday it was Maxson (by Johnson x Negro )’s turn early in the morning to show his potential as a fututer dressage horse. Perhaps a bit fresh, but with a lot of imprint and well carried, he showed his movement potential, after which the verdict “invited to the presentation” sounded throughout the hall.

During this presentation of the designated stallions he impressed in hand and was rewarded with a Premium award! According to the jury, he is “strong built with a good top line and great transitions”. A fantastic result.

In the afternoon it was time for the finals in the Stallion Competition. Kjento (Negro x Jazz) was in good shape and showed to be enormously rideable. The large-framed stallion walks with a good rhytm and great overtrack. The trot and canter have a lot of power and his strong hindleg shows a lot of quality in all transitions. In the day competition he was narrowly second, in the overall competition he was only 1 point behind the number 1…

Then it was Jayson’s turn (by Johnson x Negro). He was also allowed to show his skills in a competition context. “A stallion with a lot of power that can be worked well, we think it’s a matter of time before he can process the power in the hindleg,” according to the jury.