Negro son Nuit d’Or has won the qualification for the Bundeschampionate in Hagen. Together with Lars Ligus in the saddle, they shared first place with an average of 8.4. Nuit d’Or was sold for € 240,000 in 2017 during the PSI auction in Ankum. 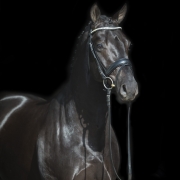 Franka Loos and Giovanni (Chippendale x Scandic) finished 5th in the classification of the Small Tour during the Dutch Championship in Ermelo. In the U25 class, Franka made her debut with the black KWPN approved stallion Diego (Negro x Don Gregory). This still early combination left a very good impression. Unfortunately, they had just a few too many matching errors to achieve a high score, but the quality and potential are certainly there. With more routine in the U25 tests, this combination will definitely score higher.

Watch the Kur on music here during the Dutch Championships on May 24-26. 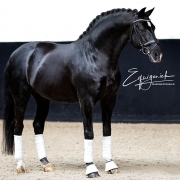 In addition to our up-and-coming young talents, the three top progenitors of our station showed themselves with great enthusiasm on Easter Monday. All 3 impressed them in their own way. The preferent Negro (by Ferro) and the preferent Painted Black (by Gribaldi). And the stallion who has since set up his own stallion line; Lord Leatherdale (by Lord Loxley) under saddle. 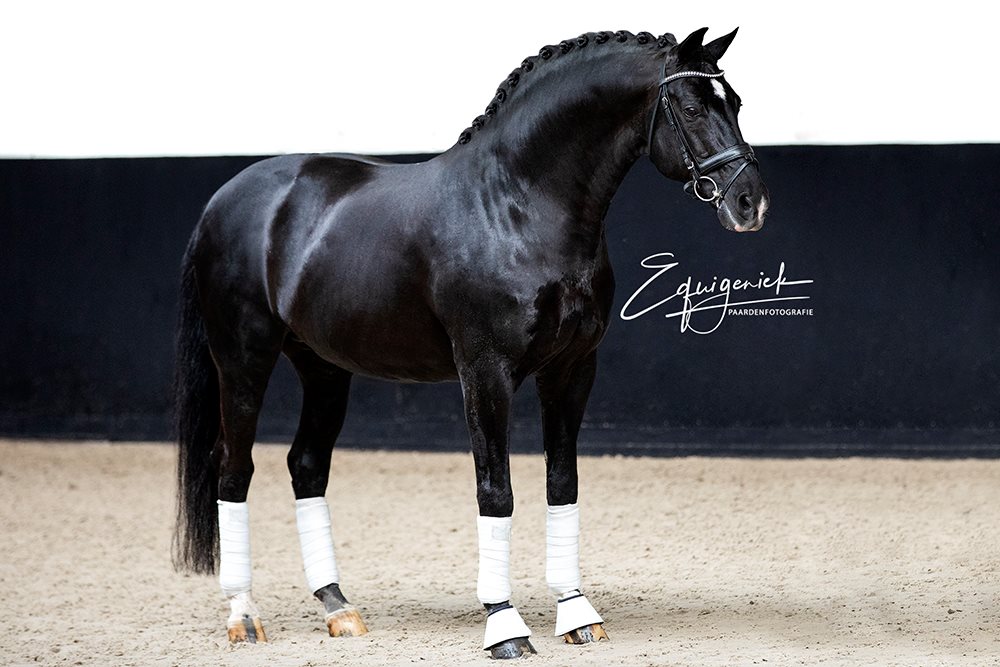 The emperor of our station is the now 24-year-old preferent top progenitor Negro (Ferro x Variant). Negro continues to stand out with his offspring. Last summer there were again many daughters who scored high on the studbook recordings of the KWPN. Negro crossed with today’s bloodlines continues to give a modern sport horse without losing quality. His son Kjento (mv.Jazz) is a wonderful example of this. But also new offspring of Negro continue to report at the highest level; Nespresso (mv.Tenerife) Anne van Olst, Elegance (mv.Monaco) Beatrice Ferrer Salat and River Rise Nisa (mv.Amsterdam) with Charlotte Dujardin, the rider who was unprecedentedly successful with the legendary Valegro (Negro x Gershwin). Negro also passes on his qualities as “father of the mother”. A daughter of Negro almost guarantees breeding success. Striking from Negro daughters include World Champion Glamourdale (by Lord Leatherdale), Grand Prix talent Everdale (by Lord Leatherdale), Pavo Cup winner Jameson RS2 (by Blue Horse Zack), Grand Prix winner Eddieni (by Johnson) and approved stallion Jayson (by Johnson) who is in the race for a World Cup ticket to Ermelo. 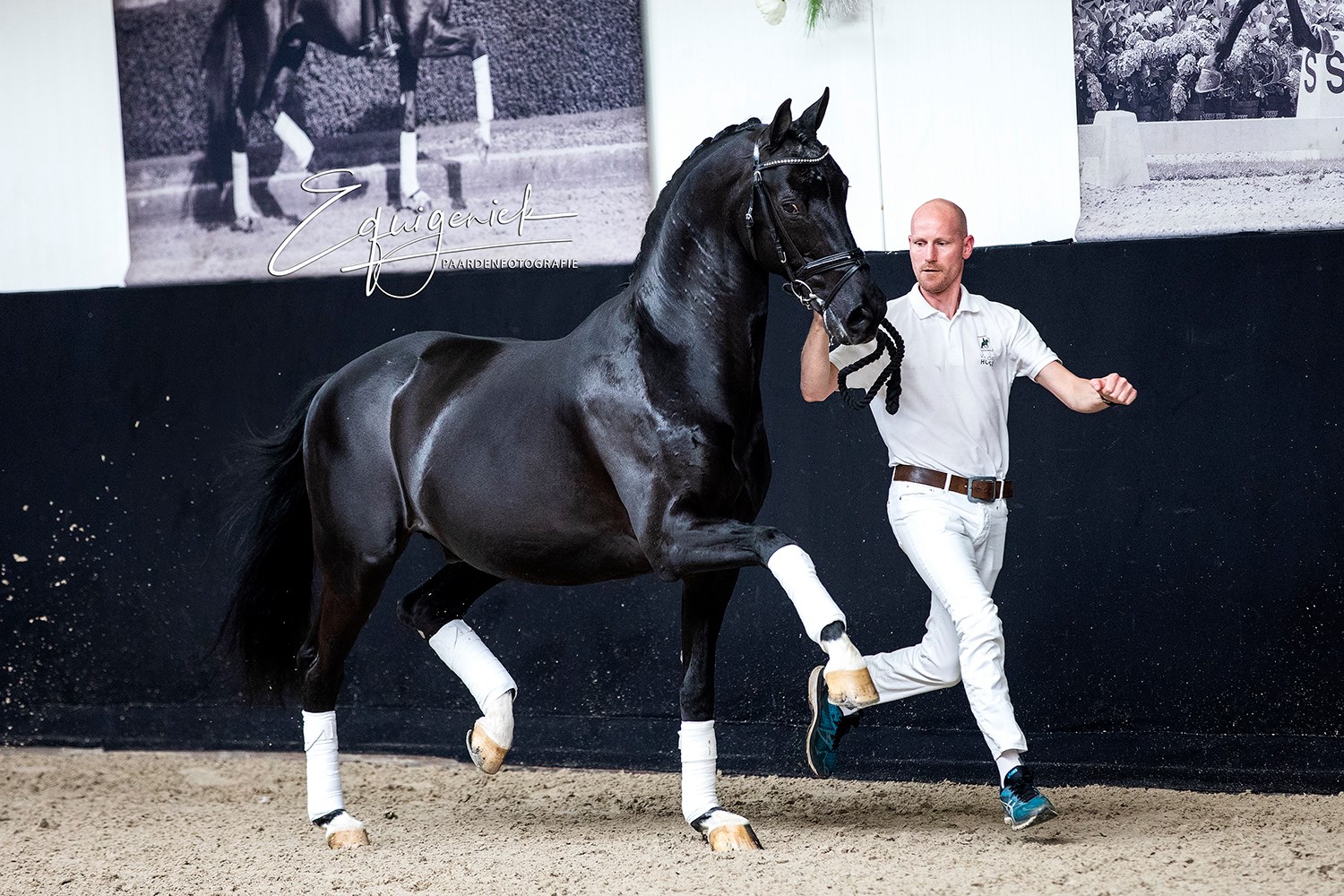 The Olympic participant Painted Black is also preferent. This 22-year-old son of the top stallion Gribaldi out of a mother of Ferro showed 2 very modern foals. The proof that Painted Black also still participates well in today’s modern dressage breeding. Painted Black showed himself super fit on Sunday and showed his impressive trotting mechanism. He has had an impressive dressage career and has started a second youth in breeding. More and more of his children break through at the highest level. Recently they are; Charming Lady (x Krack C), Don Bravour (x Chronos), Black Pearl (x Negro) and Zenith (x Krack C). 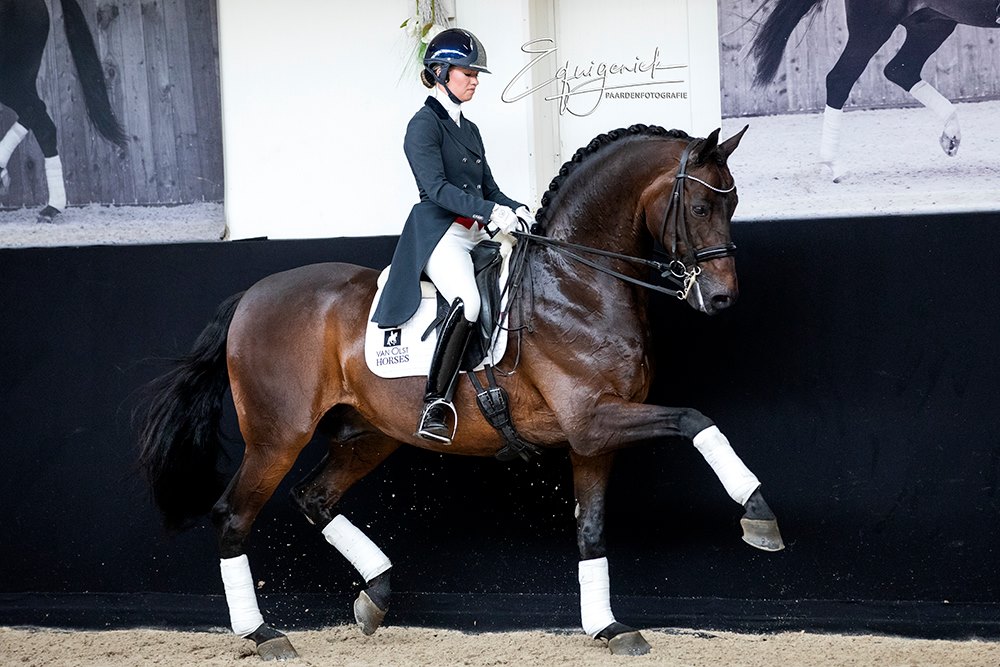 The now 16-year-old Lord Leatherdale has proven himself at Grand Prix level. The stallion with his “innovative and free” blood lines has set up his own stallion line. A special achievement that is reserved for very few stallions. It fits fantastic at our station in combination with Negro mares. The combination of Lord Leatherdale x Negro is now called “classic”. Chippendale is the first son of this combination. In the meantime, his 3 sons have been approved; Giovanni (x Scandic), Crosby (x  Flemmingh) and Imagine (x Jazz). Everdale also has 3 approved sons at the KWPN; Inclusive (x Uptown), Inverness (x Johnson) and Inspire (x Don Romantic). Van Glamourdale has meanwhile his son Lance V.O.D. (x Davino) approved in Denmark and Lennon (x Jazz) appointed at the KWPN. 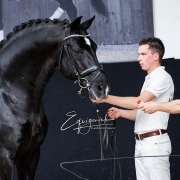 Easter Sunday, Sunday, April 21, the annual stallion show was held at our company in Den Hout. A lot of interest, beautiful weather and of course our stallions who showed themselves in a great way. A very successful day that was beautifully captured by Dominique van Dreumel from Equinegeniek! 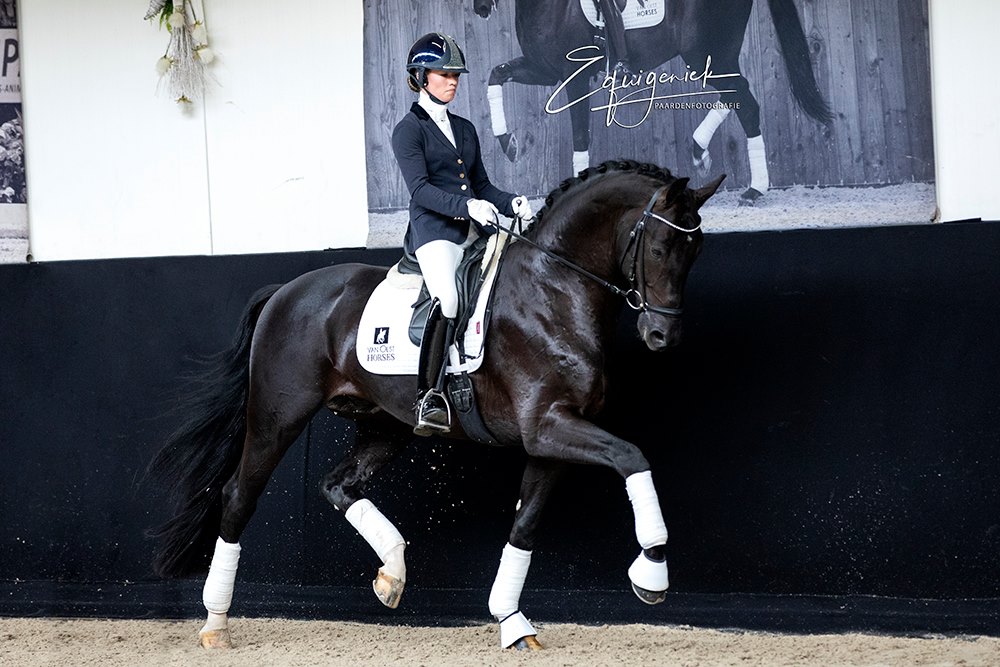 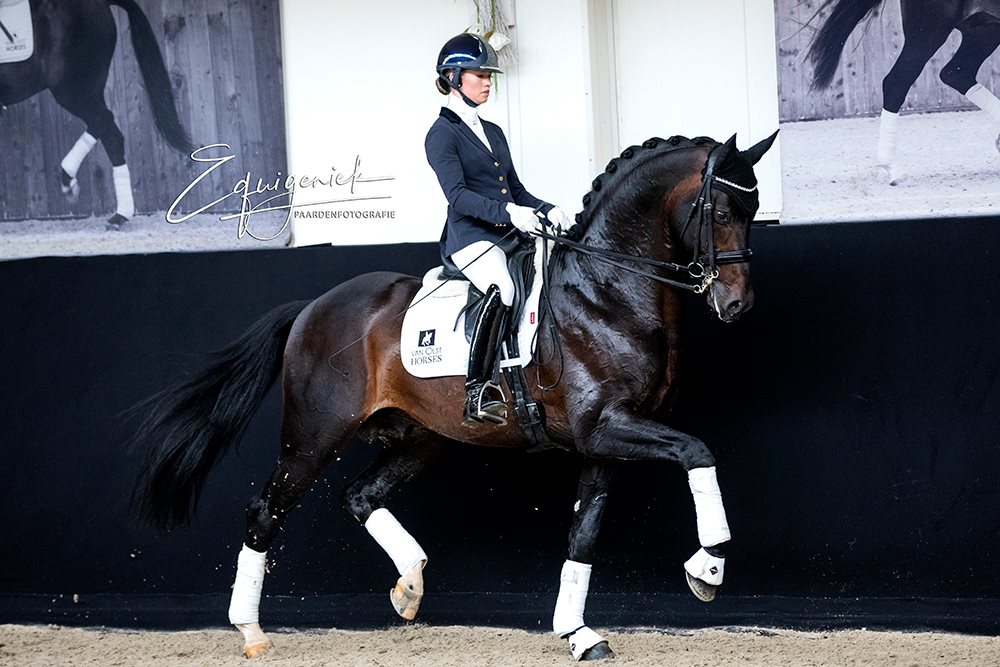 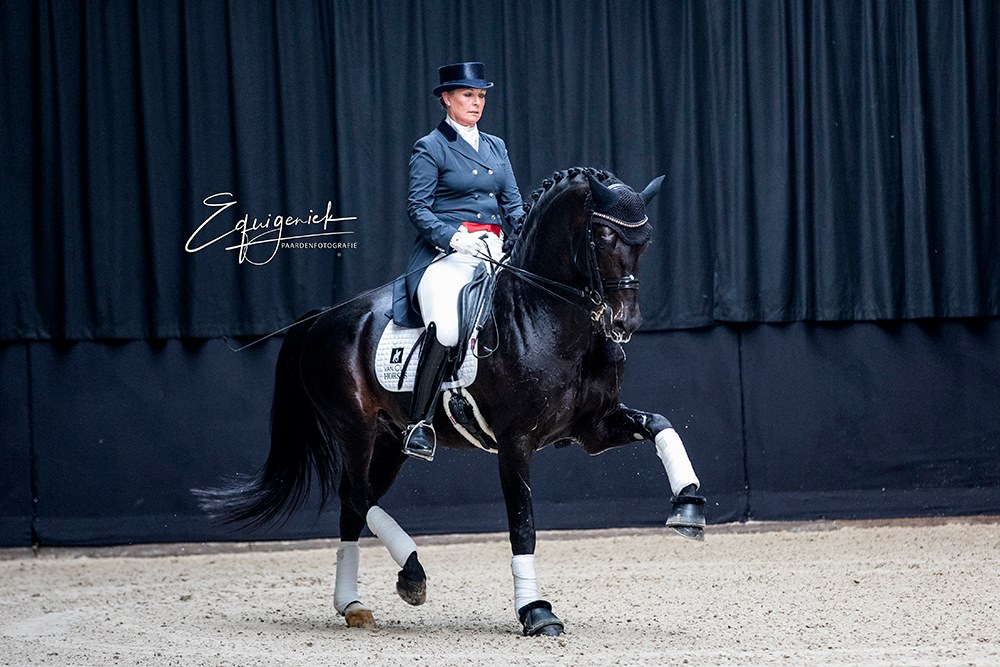 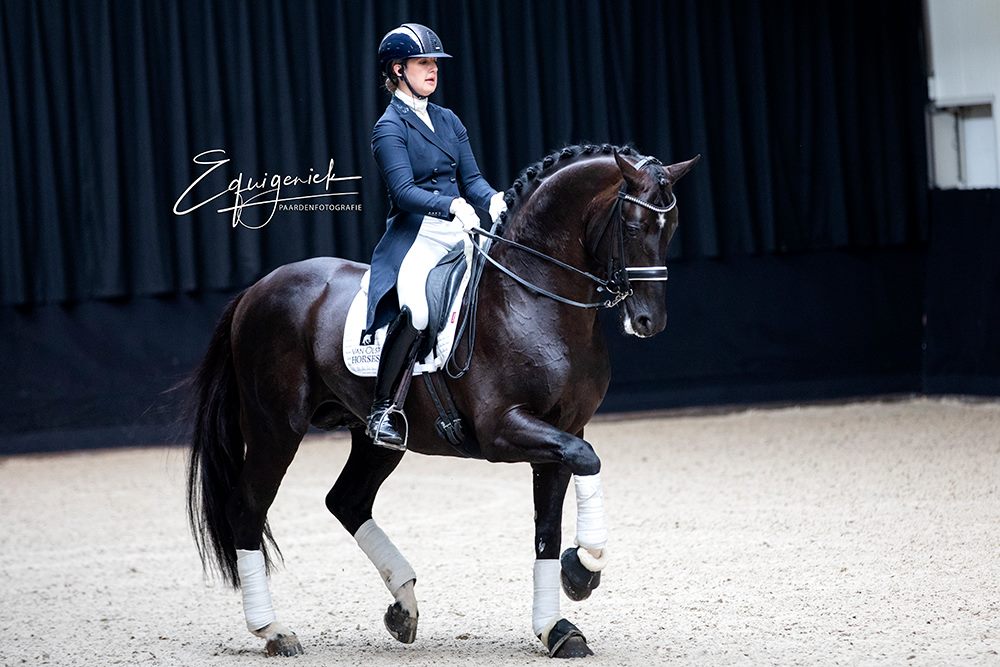 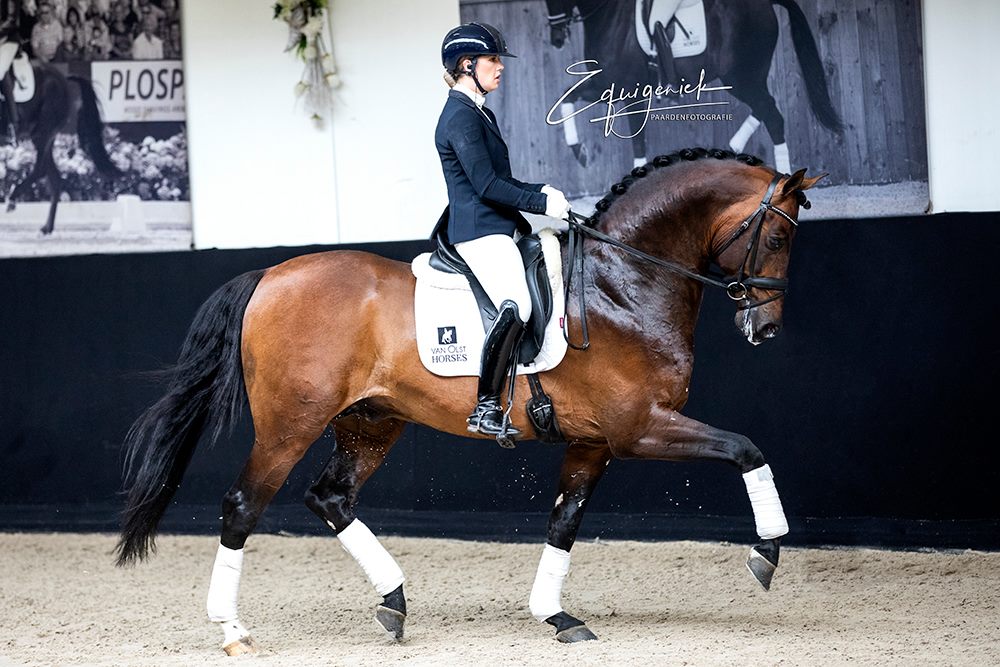 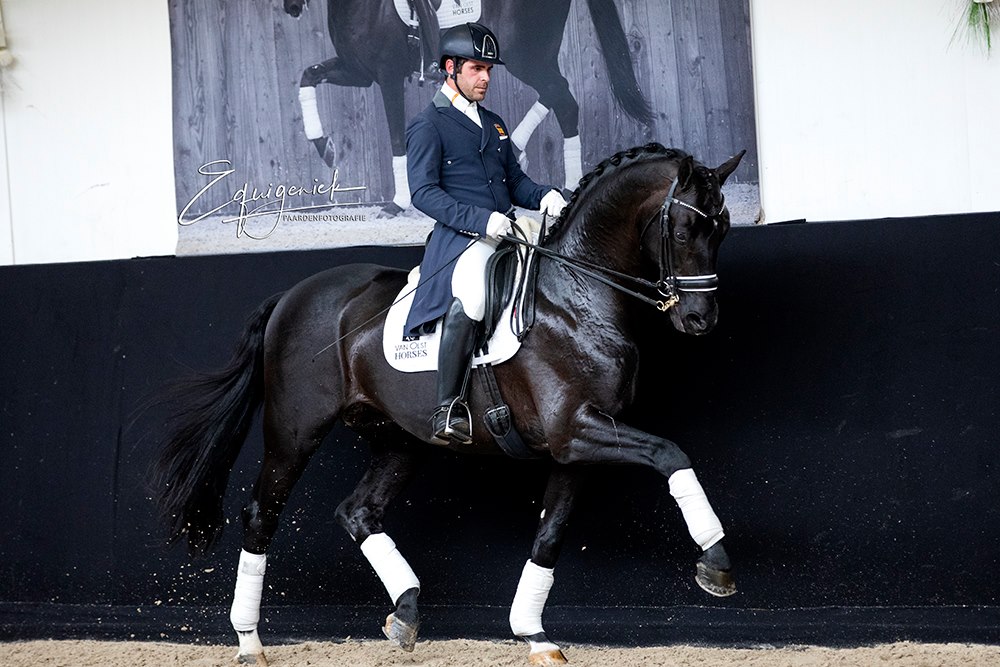 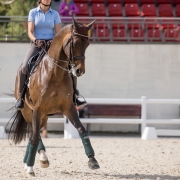 As a three-year-old Elegance was sold to Beatriz Ferrer-Salat. Beatriz also bought Elegance’s full brother, the NRPS approved stallion Nick. Both Nick and Elegance are bred by Van Olst Horses and come from the elite, preferent sport (dres) mare Reina. This daughter of Monaco x Sultan ran herself under the name “The Rose” at international Small Tour level.
The ten-year-old gelding won several young horse classes in Spain and was calmly trained until the Grand Prix. In Granada was the international debut in the Big Tour. In the Grand Prix the combination was first with 69.413%. “I am very happy with Elegance, it was his first international performance and they were not optimal weather conditions,” Ferrer-Salat continued, “so there were moments of excitement, but it is a great horse that is becoming increasingly comfortable in the tests.” 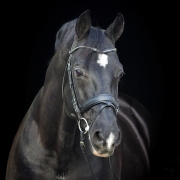 During the IBOP in Luttenberg in Overijssel, 15 mares succeeded. In terms of points, Lady (by Negro) scored 83.5 points with the dressage horses.

The dressage mares had a high success rate and also an outlier came forward. Veterinarian and team veterinary Edwin Enzerink came out as a breeder / registered for the only three-year-old Lady (Negro from Welcome keur IBOP dres of Krack C), who could subsequently also be declared “ster”. She collected 83.5 points in the IBOP with 9s for both the balance and the ridetability. A striking result for the mare that has to be three years old. “This well-developed mare excelled in her attitude, balance, support and workability. That was strikingly good for such a young mare. The trot and canter are with a lot of leg technique and the image is always beautiful uphill. Lady can already ride and work fantastically well, and is a generous and upward-built mare, “says inspector Henk Dirksen. 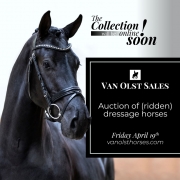 Collection will be online soon!!!

During the CDI Lier, which started on Wednesday 27 February, Charlotte Fry and Fendi T gained a nice 2nd place in the Small Tour with 71.35%. The duo showed a strong test where nines were scored on various parts. Unfortunately, there are also a few small mistakes that the victory just passed them by. 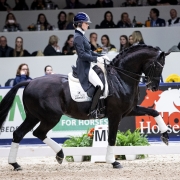 Friday evening 1st February Glamourdale, together with Charlotte Fry, showed why they are the 2018 FEI World Champion. After a tremendous show during the K+K Cup in Munster this was only the second time that Glamourdale, after his victory last Summer, had appeared in the ring. His impressive trot and canter resulted in an enthusiastic reaction from the public and a standing ovation. 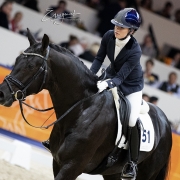 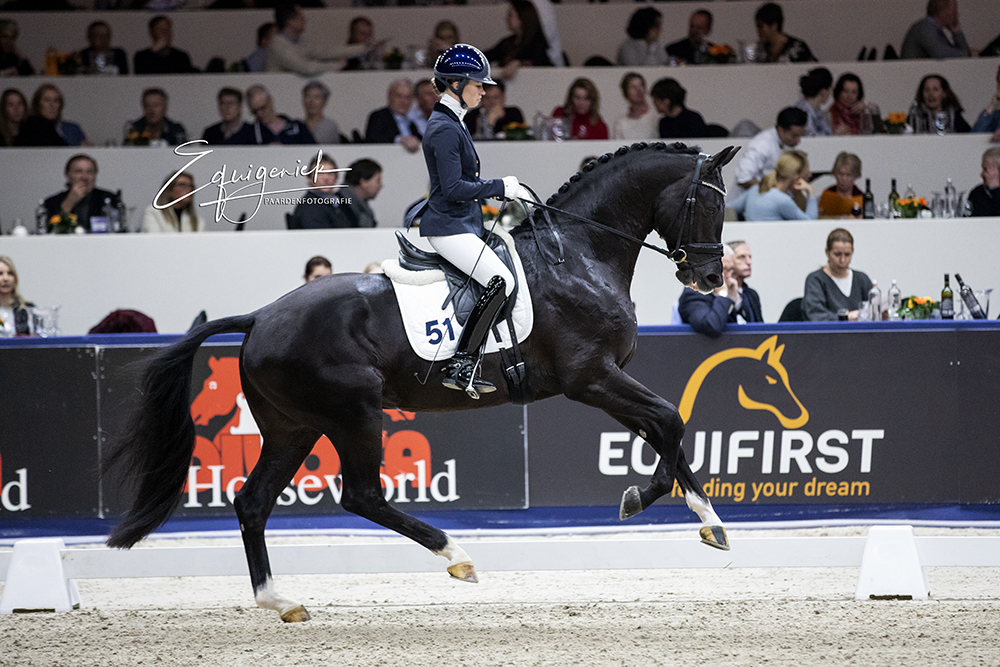