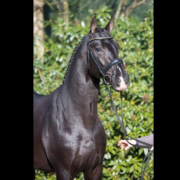 Evegro is a 7-year-old stallion who was approved as a three-year-old by the NRPS and later that year was also approved in Finland. As a 5 year old he returned to Van Olst Horses, after which he was trained by Charlotte Fry.

Evegro’s sire is the Olympic stallion Everdale. His mother, Fresia, is a daughter of the well-known Negro bred out of the Monaco mare Reina. Fresia is not only the dam of this Evegro, but also the dam of the NRPS approved Irvin s. Inspire and also the NRPS approved Everest s. Especial. Everest recently won the KWPN Young Dressage Talents competition for three-year-olds at indoor Oosteind with a 10 for his canter. This striking gray also received a 10 from the guest jury.

But this is not all that comes from this direct dam line: Granddam Reina is also the dam of the Olympic dressage horse Elegance s. Negro ridden by Beatriz Ferer Salat, who are a members of the Spanish dressage team.

We congratulate Lotje with Evegro and wish them a lot of success in the future! 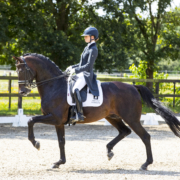 Recently the American rider rode the mare to the title at the national championships in ‘Fourth Level’. The mare was bred in the Netherlands and comes out of the famous damline of Tineke Bartels’ Grand Prix horse Barbria. She is also related to Blue Hors Don Olymbrio. In 2016, under the saddle of José van Haaren, she scored 80.5 points at the IBOP in Asten. After that the mare has been sold to America. 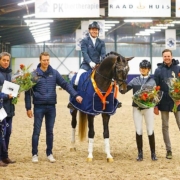 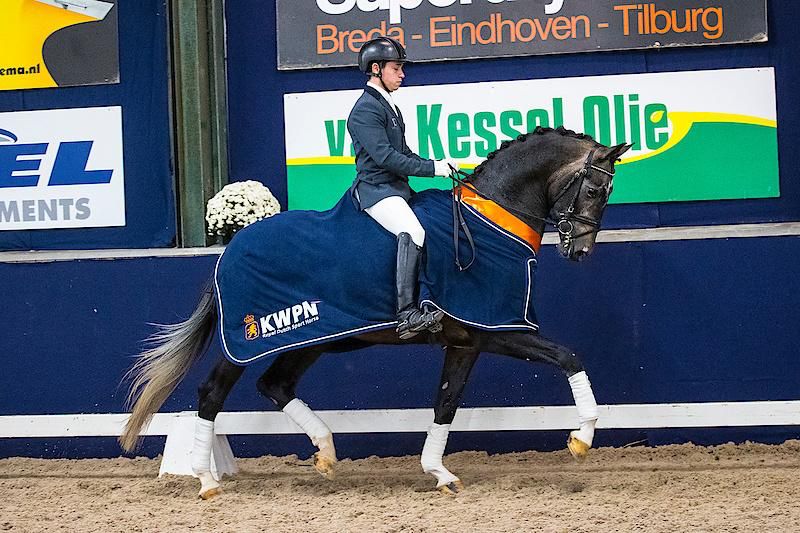 But this was not the only success! Lottie rode the black mare Nova-Liz (aka Prada, Everdale x Johnson, bred by E. van de Steen) to a wonderful 2nd place. Only one point behind Everest after the first round and she also got a 10 from Franka after she rode her. 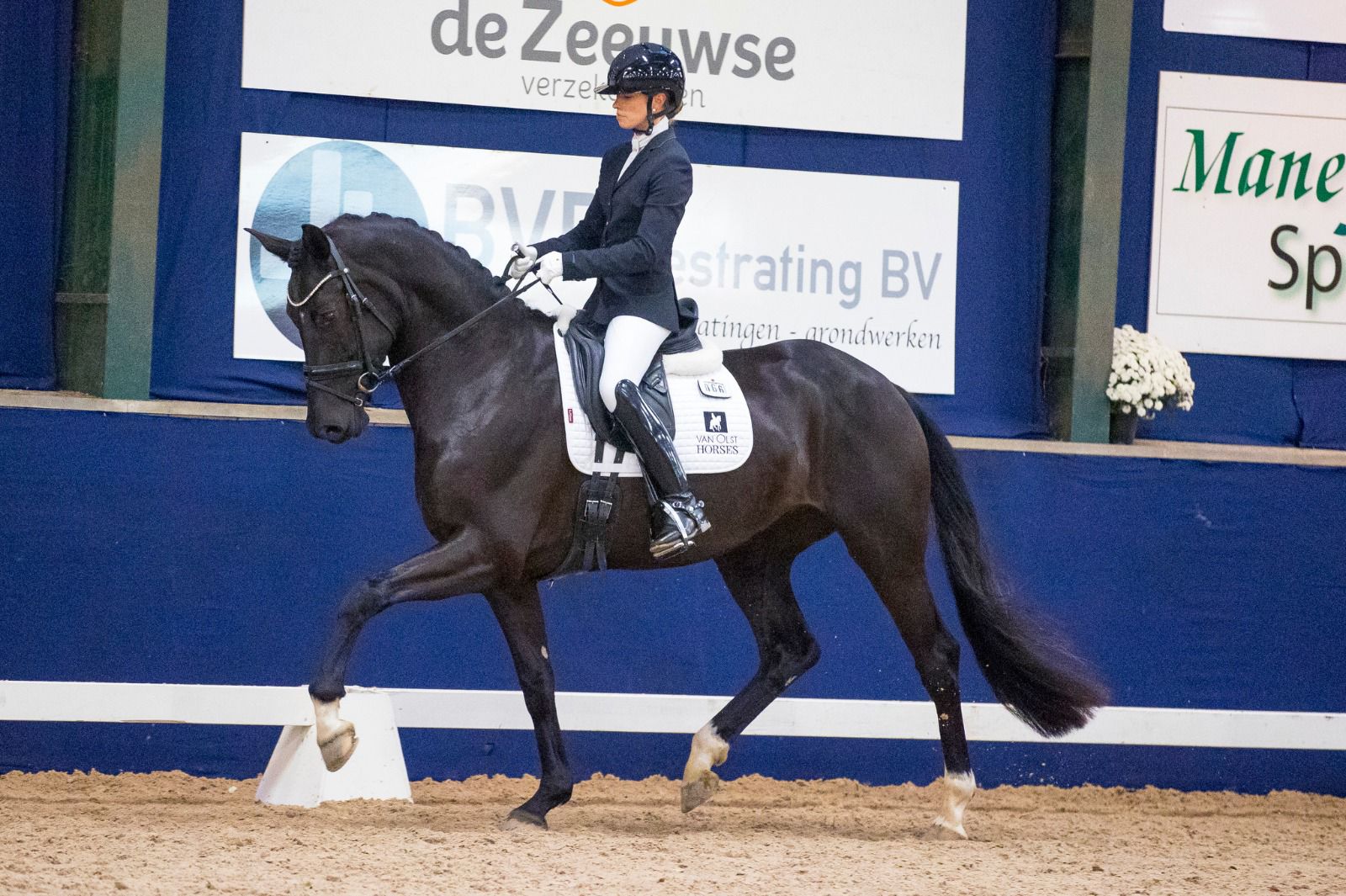 5th place in this class was for Nareina (Everdale x Krack C, bred by C.G. Oudijk – v/d Steldt). She scored 85 points in the first test ridden by Alvaro and also got 85 points from Franka. 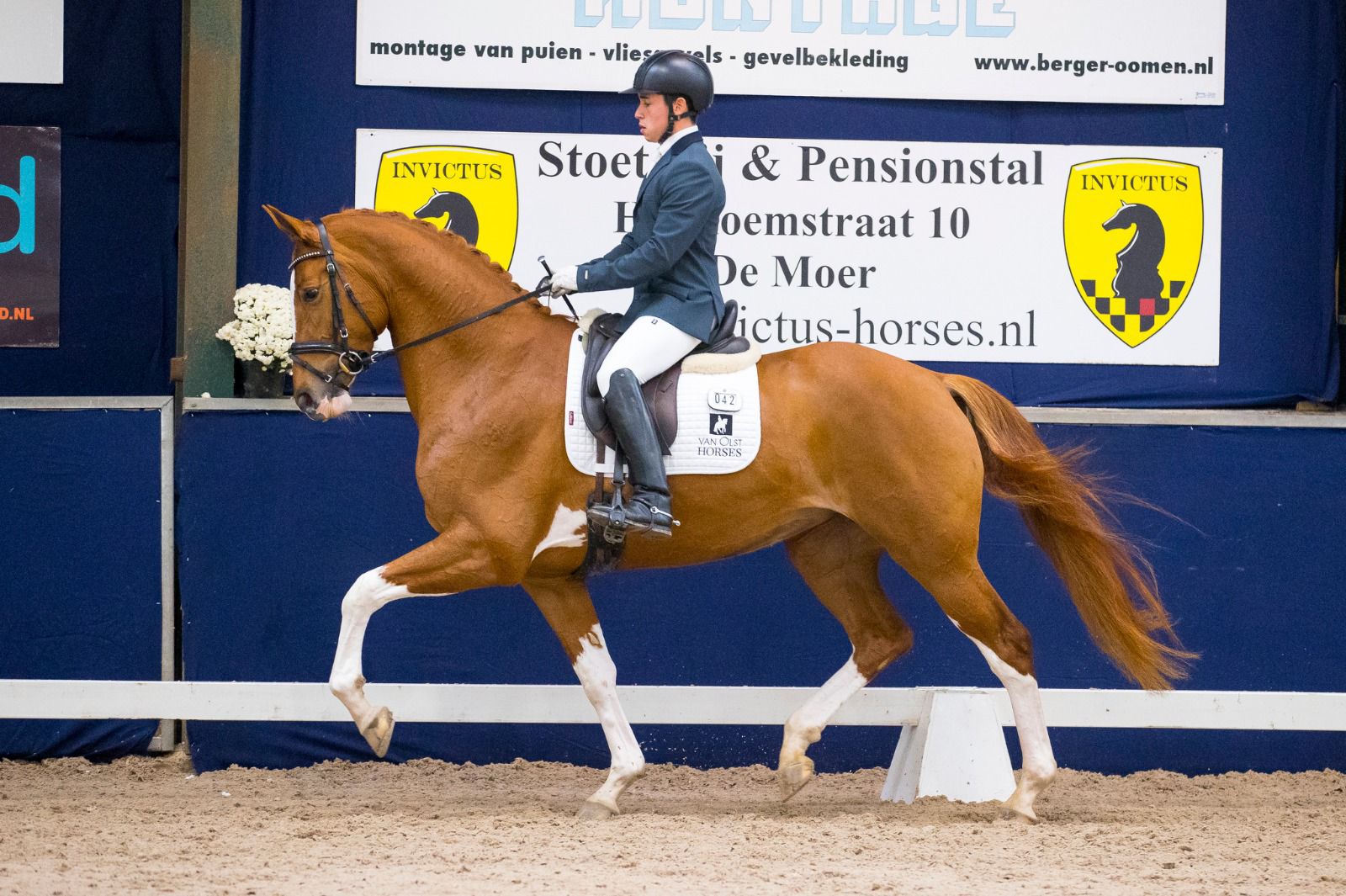 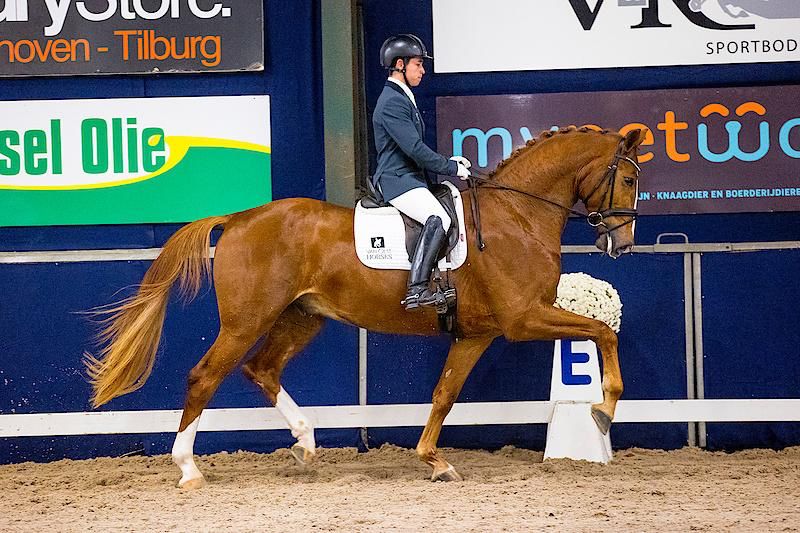 In the four-year-old class Alvaro rode the stallion Irvin. Irvin received 83 points including a 9 for his canter. The combination finished in fifth place. Irvin is a descendant of Inspire x Negro, bred by Van Olst Horses. 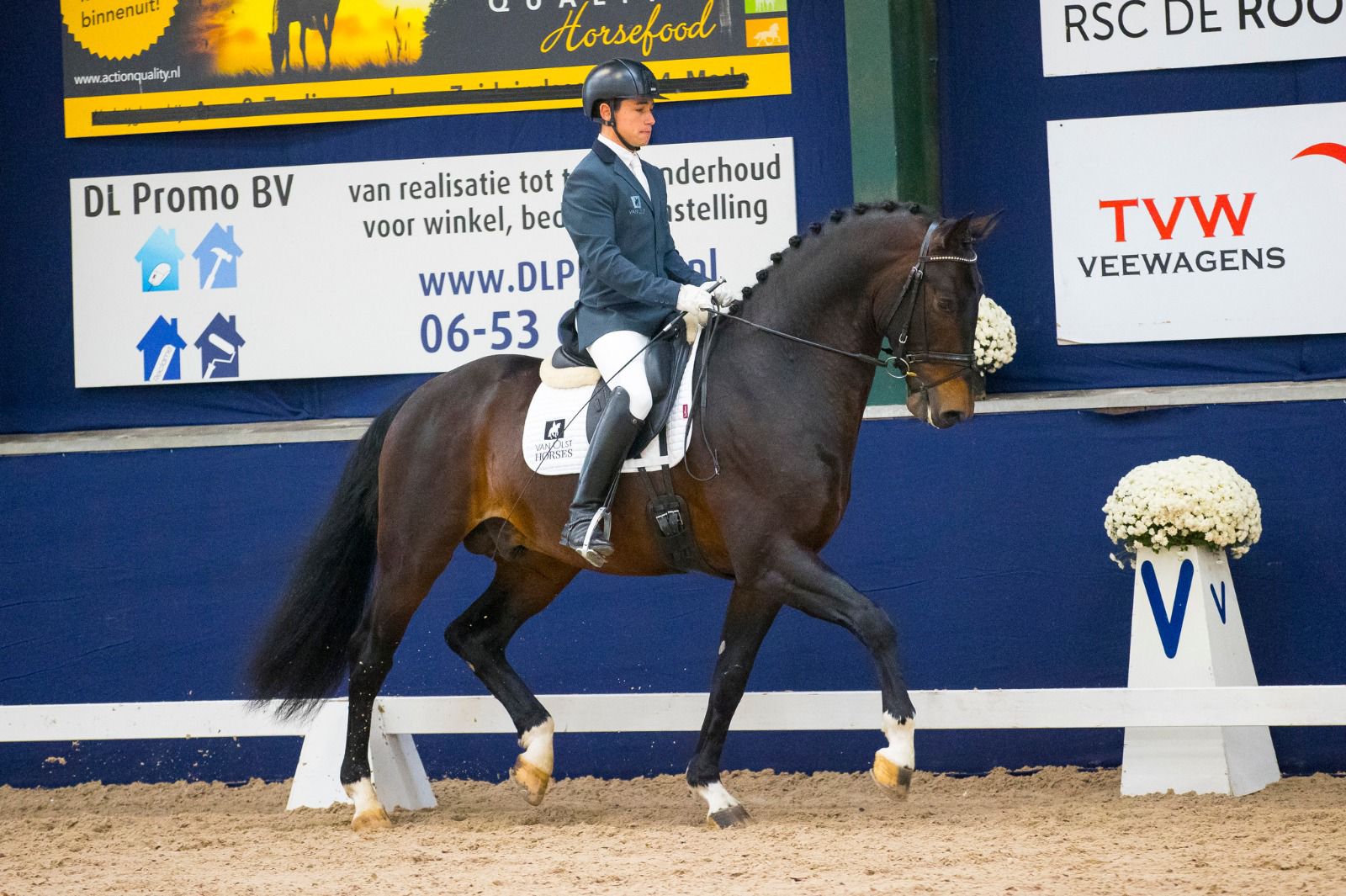 Lottie and Maxson (Johnson x Negro, bred by W. Verschuren) were placed sixth in the 4-year-old class. Maxson received a 9.5 for his fantastic canter. 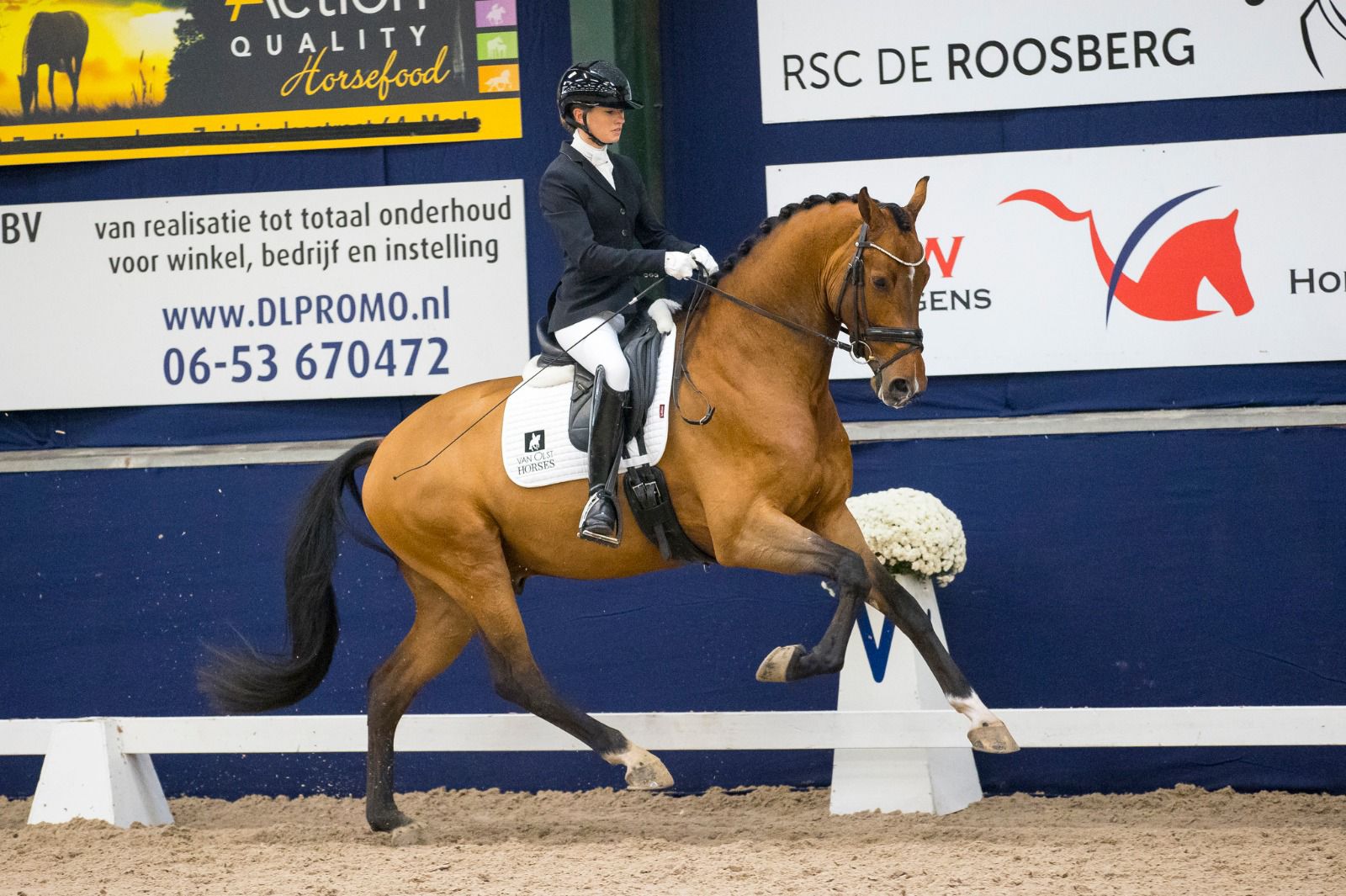 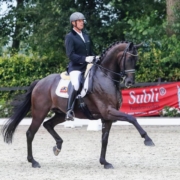 Last weekend Patrick van der Meer and Idefix managed to win the ZZ-zwaar class at Charon Paardensport in Den Hoorn. Idefix is a descendant of Chippendale. He’s bred by Jacatra B.V. The combination showed a lot of potential and scored no less than 73%! 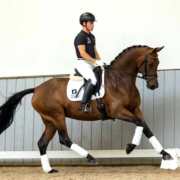 We knew upfront that there was a lot of interest in Guinness and Noire NA. Noire NA, by Painted Black, managed to keep the bidding going the longest and was sold for €90.000,-. Jack, the first horse in the auction was not sold, just as the stallions Depay and Irvin who will also stay in Den Hout. Mabel by Dettori will go to an English stable and Mistral by Fiamingho will leave for Canada. The other horses have been sold to England and to Dutch riders.

Many horses have already been viewed and tested under the saddle. This is still possible until the auction ends. Please contact Van Olst Horses by emailing info@vanolstsales.online or calling +31 162 429360.

To be able to bid, you can register for free at http://www.vanolstsales.online 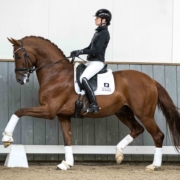 The combination rode a nice test and received 85 points. Lantanas has clearly become stronger in the past period. He showed good attitude and a lot of technique. 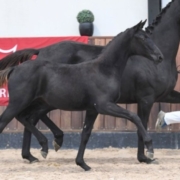 The Glamourdale x Franklin filly Worres Nikita was sold at the DWB World Cup Foal Auction for 40,000 euros. The foal will move to the stables of Helgstrand Dressage.

Worres Nikita was bred by Stud Worre in Denmark. 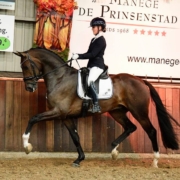 Last Saturday the VWF Prinsenstad took place in Delft. Kim Noordijk rode the test for three-year-old dressage horses here with No Nonsense D. This horse is a descendant of Glamourdale x Olivi. He’s bred by P. Damen. No Nonsense D is owned by Witte-Scholtens and MT-stables.

Kim describes No Nonsense as ‘a great horse to ride with a top attitude’. The combination received beautiful marks including a 9 for trot and elasticity and an 8.7 for canter and carriage. A promise for the future! 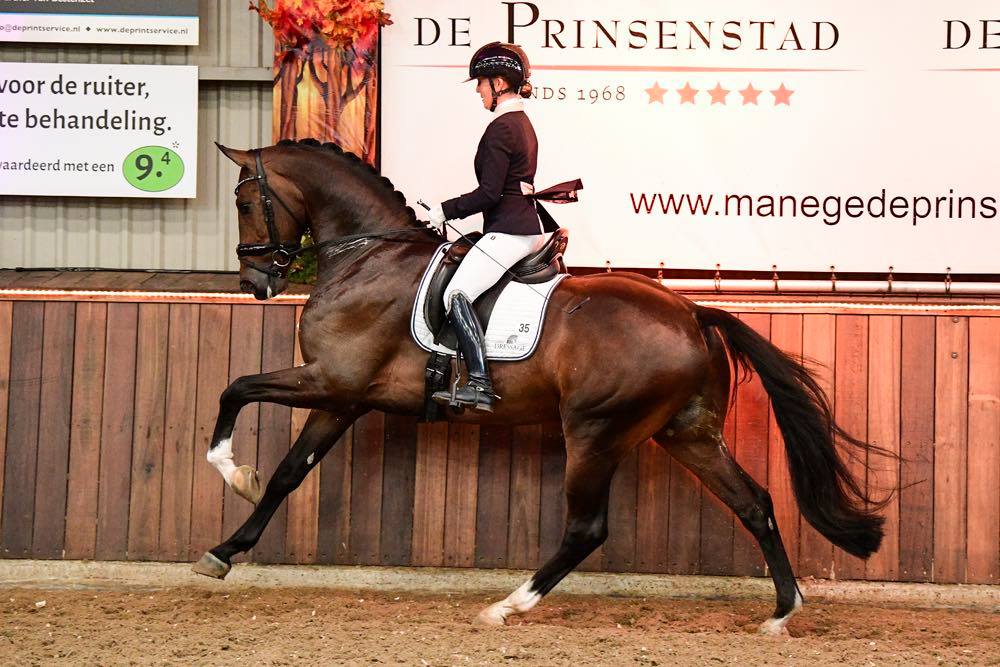 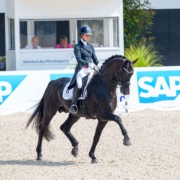 With 83.5 points, Narzar (Glamourdale out of Zarzar elite IBOP-dres pref PROK by Jazz, breeder W. Smid of Nuis) owned by J. Hooge of Ees achieved the highest score of the day. This three-year-old scored 8s and 8.5s and became an instant elite mare thanks to the IBOP. “This mare stood out with three good basic gaits and a beautiful silhouette. She walks well, trots with impulsion, suppleness, good posture and a nice foreleg technique. In canter she has a lot of power, space and attitude. In addition, the image is always uphill and moves with good behavior. She is also a pleasure to ride,” says Bart Henstra.