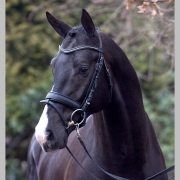 The 10-year-old black stallion Everdale (Lord Leatherdale x Negro) is until the end of the season only available via frozen semen.

By its strong performance last week at the CHIO Aachen, Charlotte Fry rode him to almost 72% in the CDI3 * Grand Prix and almost 73% in the CDI3 * Special, and their
high scores during their international debut at the CDI Compiègne is the duo on the long list for the British team.
The Europeans are this year from 19th-tm 25th of August organized in Rotterdam. 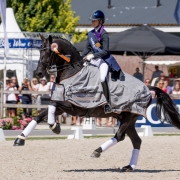 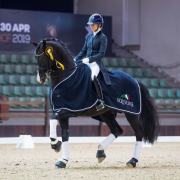 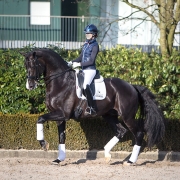 The new champion of the four-year-old and older dressage mares is the five-year-old Jet-Ray (Everdale out of Danira, star D-OC of De Niro, breeder E. Kruiswijk of Loenen aan de Vecht). She particularly stood out for her generous size and size. Inspector Toine Hoefs: “She first showed herself very well, she can trot well and take extra steps. In total she should be a little more upward. ” 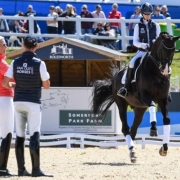 During the second competition in the Subli Competition for Young Dressage Horses in Schijndel on June 15th, the victory of the four-year-olds went to the Everdale son Kenndale.

“Van Houtem-Vos entered the ring with her horse as the first combination with the four-year-olds and immediately put down a great test,” said jury member Schaeffer. “Kenndale was nice and loose through his body and his rider let him constantly pass through the test. Definitely a nice horse to see. ”Together with Kenndale (by Everdale), Nora van Houtem-Vos with a score of more than 84% was too strong for the 22 combinations. “A lot of people have already indicated that they are interested in him, but I really won’t put him away!”
The black stallion is still very young at the age of four. “He is exemplary. Kenndale walks around in such a competition as if he had never done anything else so he doesn’t look up or down. It is precisely in the ring that he gives me that little bit more. I ride him from the age of three and a half. The first time I took him, he immediately became third, the next time he led the entire day and he became champion at the talent competition. Everything is good about him. He has a great walk, nice trot and a strong canter. So a very complete and nice horse “, the rider tells enthusiastically. 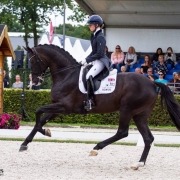 In the Inter I kür to music, there was a third place for Charlotte Fry with Fendi T (Negro x Lester). The win went to the Painted Black son Painted (mv.Sandro Hit) with Geert-Jan Raateland. 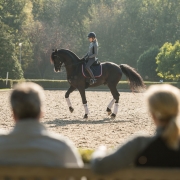 At the CDI Kronenberg, third place in the Grand Prix went to Charlotte Fry with Everdale (Lord Leatherdale x Negro).

Everdale and Charlotte Fry scored 70.565%. The British was placed at the head of two judges. One and two on entry pushed the score down considerably, but the duo received several eights for the impressive galloping tour. 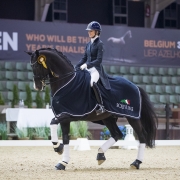 The world champion scores in France. And how! In Compiègne, the KWPN stallion Glamourdale was the strongest in the Small Tour with force majeure. Under Charlotte Fry, the eight-year-old stallion won 77.35 percent in the Prix st. Georges, in the Intermediaire I it was 77.10 percent. Stable mate Everdale made his international debut at the highest level and was in first place in the freestyle.

“It is unbelievable what Glamourdale does in the Small Tour”, rejoices Anne van Olst. “He was a bit more tired in the Intermediaire I than in the Prix st. Georges, that is also possible with such a young horse. Glamourdale has a great attitude. He gives everything in the ring. I would not know what could be improved, I think there is no better horse in the Small Tour right now. Glamourdale has all the qualities of the world and is received positively. ”

Proven combination
Glamourdale comes from the proven combination of Lord Leatherdale from a Negro mother. Joop Rodenburg from Ouderkerk aan den IJssel bred the strongly moving black from his preferent Thuja, she is known as the full sister of the international Grand Prix horse Numberto.

Everdale international debut
The KWPN stallion Everdale (Lord Leatherdale from Aliska K elite EPTM-dres PROK, breeder P. Kluytmans from Tilburg) ran to 70.41 percent in the CDI3 * Grand Prix and was able to win  the freestyle to music with 76 percent. “Everdale was fresh,” Anne continues. “In the beginning, the trot tour was therefore a bit careful. He walked with great ease and power in the freestyle. It is his first international Grand Prix, but the ease with which he plays with the heavy exercises is great. A good day for us all! ” 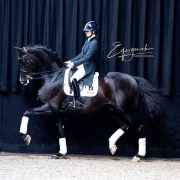 The CDI Compiegne (FRA) will be held from 16 to 19 May where Charlotte Fry, among others, will launch Everdale.

Everdale (Lord Leatherdale x Negro) and Charlotte Fry today made a fantastic debut in the international Grand Prix during the CDI3 * in Compiegne. In a large field of 32 participants, they were the first to start this morning. With many impressive parts but also some ring inexperience at this level, the duo managed to put down a great test and impressed the jury with 70.41% during their very first international Grand Prix test. “He was a very good boy, and showed so many good things. We are just starting at this level together, so for now I am very satisfied “, says a delighted Lottie.
Our preferent top producer Negro (Ferro x Variant) was strongly represented in the top 5 of the three- stars Grand Prix. The winner was Johnson’s son Eddieni, with the Swedish Malin Wahlkamp-Nilsson, who, like Everdale, was bred from a daughter of Negro.

On Sunday April 28th the Grand Prix debut of our top stallion Everdale was planned, as well as the upcoming talent Nespresso. In Nispen Everdale showed to have all the qualities to become a very good Grand Prix horse, just like Nespresso who also managed to close his class in a winning way.

The combination scored 70.38 and immediately won the class. “I am so happy with how he did,” said an enthusiastic Charlotte Fry, who also successfully started Everdale at the U25. “He was a bit fresh. This was his first outdoor competition and lately he has run a number of stallion shows with good music. He was a bit too enthusiastic in the extended trot, but otherwise it went very well. He has no weaknesses and runs through the test with such ease. Exercises that I think are still tough, like the zig-zag in the canter, he runs through them without problems. We scored well across the board and we even got 8.5 for the piaffe”.

The Inter II was won by the also debuting Nespresso (Negro x Tenerife) with Anne van Olst. This great stallion ran his very first competition ever. He shows all heavy exercises with great ease and scored 67.35%.